Congratulations to Welcome Cole on receiving a glowing review and a coveted star from Kirkus on his book, "Henry's Re-Entry." 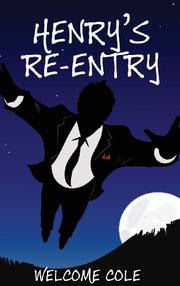 Cole’s (The Pleasure of Memory, 2013) novel is equal parts snark-filled road trip and bittersweet confrontation of past sins. Henry wakes up in a gas station bathroom, crusty with vomit and missing both a shoe and his wallet. Exiting, he finds himself in New Mexico, his car nowhere in sight and his memory lost to a weekend of boozing. This is his re-entry into a miserable life spent guilt-ridden over how he treated Zoe, his wife, who’s been dead for four years. Naturally, his first stop is a bar just steps away. Clarence, the philosophically inclined bartender, insists that he drink some water. During the ensuing back and forth, Clarence calls Henry out on carrying needless emotional baggage. Eventually, Henry leaves and begins hitchhiking; he meets a string of fascinating people, including Rev. Joshua White, a social worker named Mrs. Pena, and the stunning Alice—a dangerously perfect companion who’s on a yearly pilgrimage with her siblings. Henry joins Alice and company in their van, hoping to reach California while reluctantly cleansing himself of the idea that he’s no good for people. Has Zoe’s ghost trapped him, or can Henry be salvaged from this self-destructive epic outing? Cole’s tale of impossible redemption is, sentence for sentence, a textural feast. Fabulous lines like, “He collected friends the way a lumberjack collected trees...[they] only complicated his plans,” pop on every page. Equally marvelous is his dialogue; Clarence tells Henry, “You like the drama because it makes you feel important, gives you a sense of purpose, a reason for not being dead.” Readers will savor Cole’s narrative as it unfolds across a series of conversations that are by turns probing, poignant and hilarious. From his time with Rev. White, readers learn that Henry is a relentless cynic; from Mrs. Pena, that he’s softer than he appears. Alice, with eyes like bright green kryptonite, threatens all of his bourbon-drenched defenses. By the end, readers will wish these terrific characters could stick around longer. Cole maps out a propulsive emotional journey.
Tweet Virtualbookworm Publishing is pleased to announce the Virtualbookworm Book Blog Tours. This February and March, some of our recently published books are being passed around the blogosphere to be reviewed by a few notable and well-read bloggers. With February almost gone, the tour is well underway and Dirty Rice, The Elementals, and Journey of Voices have already received several wonderful reviews. Charlene of Literary R&R called Dirty Rice "captivating" and gave the book 5 out of 5 stars. Katie of Doing Dewey remarked that The Elementals was "enjoyably complex" and that she "couldn't put it down" for the "grand climactic ending." Dad of Divas found Journey of Dreams "impressively detailed" and voiced that fans of historical nonfiction "will be drawn in and love this book from beginning to end." Feel free to click through and browse the book reviews for these three books (linked above) and look out for these next two titles, coming to a blog near you in March!"